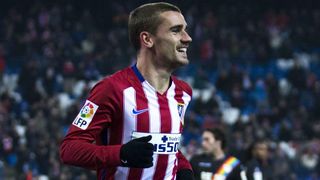 Atletico Madrid president Enrique Cerezo claims Antoine Griezmann is a "star" of world football and revealed the club have not received any approaches for the Frenchman.

Griezmann has been in outstanding form for Atletico this season, with his 12 goals in La Liga helping the club mount a serious title challenge.

The 24-year-old has reportedly attracted interest from other top clubs, but Cerezo confirmed no-one has put in a bid for the forward.

"Griezmann has a long-term contract, and no-one has spoken to us about a possible transfer.

"He is a world football star and he still has plenty of time with us.

"And Atletico will allow him to go as high as possible."

Atletico coach Diego Simeone has also been linked with a move away from the Vicente Calderon, mostly to Premier League strugglers Chelsea, but Cerezo insists the Argentine will be staying in Madrid.

"We have a coach who has a winning culture," he said. "Simeone has offered us come incredible years.

"The mood of everyone is that Diego continues with us.

"He has a long-term contract, and for us he is very important."