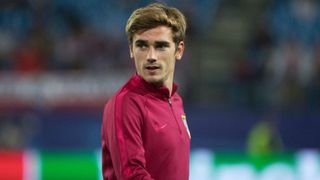 Atletico Madrid star Antoine Griezmann eased fears over his fitness ahead of Saturday's derby against Real Madrid by playing a full part in training on Thursday.

The Ballon d'Or nominee pulled out of France's 0-0 friendly draw against Ivory Coast this week after sustaining a blow to his left foot during last Friday's 2-1 World Cup qualifying triumph over Sweden.

X-rays confirmed Griezmann did not suffer a broken bone and Atletico defender Juanfran told Partidazo COPE that the 25-year-old was confident of facing Real at the Vicente Calderon.

It appears he will be as good as his word after joining Juanfran and his other team-mates for work with and without the ball on Thursday evening.

The penultimate training session to prepare the starts at the Wanda Training Complex November 17, 2016

Griezmann has scored eight times in 14 appearances across all competitions for Atletico this season and netted the only goal as Diego Simeone's men claimed a 1-0 win at the Santiago Bernabeu last season.