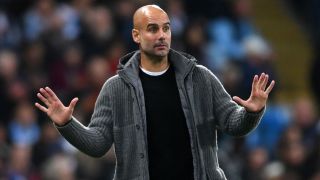 Pep Guardiola can leave a lasting legacy at Manchester City and match his achievements at Barcelona, according to Xavi.

During a four-year spell in charge at Camp Nou, Guardiola won 11 major trophies, including three LaLiga titles and the Champions League on two occasions.

Spain legend Xavi played an influential role in that glorious era and believes his old boss has the capacity to shape a City side that will go down in history alongside that fabled Barca outfit.

After failing to pick up a trophy in his first season at the Etihad Stadium, Guardiola guided City to a record-breaking Premier League triumph in 2017-18, as well as the EFL Cup, and Xavi knows there will be more success to come.

"Pep will only improve Manchester City," he told The Express. "People were impressed at how they won the title last season, but there will be more.

"He built something at Barcelona that will always be remembered in football history. He can do the same in Manchester.

"In football, it's not just what you achieve but how you achieve it. Manchester City are playing great football and I can guarantee that the players will be enjoying training sessions as well as the games.

"They will be getting more touches on the ball than they did before Pep, and that's not just the attacking players but all of the team; he likes the whole team to play football."