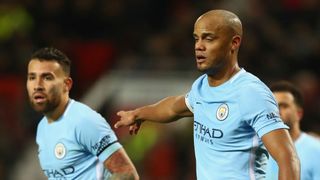 Pep Guardiola suggested he could make a change to Manchester City's defence when they entertain Liverpool in the second leg of their Champions League quarter-final on Tuesday.

City have conceded six goals in their last two outings, going down 3-0 at Anfield in the first leg before throwing away a two-goal lead to lose 3-2 versus arch rivals Manchester United on Saturday, a match in which they would have clinched the Premier League title with a win.

Nicolas Otamendi and Vincent Kompany were the centre-back pairing on both occasions, and Guardiola is considering an alternative defensive duo.

"Maybe, I have an idea what we have to do tomorrow, what the guys are going to do," he said at a pre-match news conference.

"But in the case of Nico, when a player does what he has done, all we can do is to be close to him because Nico is not just a huge quality but a huge mentality.

"It's true the third goal he has to defend his back, but we are here in the quarter-finals and 13 points in front in the Premier League and Nico is an important reason why."

John Stones did not feature in the matchday squad for Saturday's defeat and Guardiola revealed he was not risked because he was struggling with an adductor injury.

He explained: "After he had an injury in the national team [in November] when it was six, eight weeks off and after coming back he had little problems with the confidence.

"In the last game with the national team he had a concussion and he could not play in Everton, he was seven days without a training session, and before United he felt something in his adductor.

"He was not perfect and I decided not to take a risk. He knows the confidence I have in him, especially in the last years. He has to fight with these guys to prove why he should play."

Guardiola feels failure to overturn the deficit would provide a valuable lesson for his team in the long term and acknowledged City have to attack from the off if they are to progress.

"If we were not able psychologically it would be a good lesson for the future, because we are not just here for a few months," he said.

"We are going to see that it is a good test. Football, like life, is a challenge and we're happy to handle it. The result is tough but because everything can happen.

"We have to attack, to try to build the counter-attacks. We have 90 minutes and extra time and we showed we could create a lot of chances in few, few, few minutes and the opponents know that."