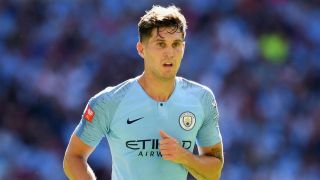 John Stones could spend time playing in midfield for Manchester City this season, according to Pep Guardiola

The 24-year-old England international, who helped City win the Premier League title last term after joining from Everton in 2016, is nominally a centre-back.

But Stones briefly moved up the field when Vincent Kompany came on as a substitute late in the 2-0 Community Shield win over Chelsea on Sunday.

And Guardiola acknowledged it was a promising display from the former Barnsley player at Wembley.

"John made an excellent World Cup and showed again his personality," he said.

"I was happy to see him in the last 10 or 15 minutes like a holding midfielder. John maybe can play there. We will see what's going on in the future. In the Premier League there are a huge amount of games and everybody will be involved."

Discussing his prospects of regular playing time at the back, Guardiola said of Stones: "John has to know he has to play at a good level because Vincent and Nico [Nicolas Otamendi] are there, and they are going to play. Then, they have to play good. In the higher teams in the top tier, when they play in all competitions, you need this kind of competition."

City's defence of the league title starts away to Arsenal this weekend.