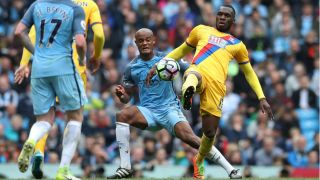 Vincent Kompany's injury absences have been keenly felt by Manchester City but Pep Guardiola hailed a "huge step" after the captain led his side to a 5-0 win over Crystal Palace on Saturday.

Kompany scored at the Etihad Stadium for the first time since August 2015 when he slammed Kevin De Bruyne's low cutback into the top corner to spark a second-half rout of Sam Allardyce's side.

The 31-year-old centre-back has now completed 90 minutes in five of City's past six Premier League games – equalling his best run since last season, when an injury ravaged campaign ended with him limping out of the Champions League semi-final loss to Real Madrid and requiring groin and thigh surgery.

City have struggled for defensive solidity under Guardiola but boast clean sheets in three of their past four league matches with their skipper restored to the team.

"It's a huge step," Guardiola said. "When we spoke this season with Vincent, we said don't put on pressure.

"You have to be able to train regularly and then play one game. After that another game, and then another one.

"He did it [again] for 90 minutes. That's not happened since a long, long time ago.

"I didn't speak with him but I'm pretty sure [former City manager] Manuel Pellegrini missed him a lot last season, for the last two seasons.

"Of course we missed him a lot. He is a real central defender.

Asked whether City could count on a fully fit Kompany next season, Guardiola was realistic in his assessment but acknowledged his backline operates with far more confidence if the Belgium international is around.

"Hopefully but we have to cover our backs a little bit," he added. "We cannot have all the confidence he will be fit because of the experience of the last years. We have to have back-ups in case something happens.

"But you have the feeling now, when the opponents cross the ball, 'wow, is Vinny there?'.

"Maybe they are going to score a goal, Arsenal scored a goal [in last month's FA Cup semi-final defeat] when Vinny was there in the six-yard box, so that can happen.

"But you have the feeling when they cross, or when you cross on a corner and a free-kick, that you are there.

"That feeling is important in this league. It is really important to have people to win duals with the head and Vincent in that is really good."

Victory over Palace enhanced City's chances of securing a Champions League berth, while Liverpool's goalless draw at home to Southampton on Sunday and Manchester United's subsequent loss at Arsenal were also helpful developments

Nevertheless, Guardiola does not want his fourth-placed side to think the job is done as they approach a final stretch of games against Leicester City, West Brom and Watford.

"You can't imagine that this season Chelsea and Liverpool were at home [not in Europe] when you see their teams," he added.

"When that happens you can imagine it can happen to you as well. That's why it is important to stay humble.

"But it is in our hands. We have two more games at home, one more game than Liverpool and it depends on that."