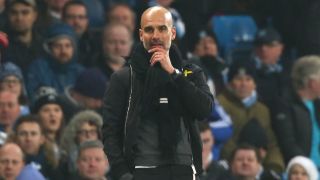 Pep Guardiola insists he must earn the right to an extended stay at Manchester City by bringing home silverware.

Guardiola is halfway through a three-year contract at the Etihad Stadium – the same length of time he spent at Bayern Munich in his previous job – and reports last month suggested the Catalan would be offered a bumper extension on account of City's dominant form so far this season.

Undefeated and with a 15-point lead in the Premier League, into the Champions League last 16 and contemplating an EFL Cup semi-final against Championship club Bristol City, it is unlikely any of the Etihad Stadium faithful would object to a Guardiola tenure far beyond his present terms.

Given Jose Mourinho this week dismissed suggestions he might look to leave Manchester United as "garbage", the prospect of Guardiola and his old rival maintaining hostilities in the Premier League is an enticing one.

However, when discussing the development of contract talks with Fernandinho, Kevin De Bruyne and Gabriel Jesus, Guardiola was unsure over the extent to which his own future might influence first-team players and added a key stipulation he must meet following a trophy-less 2016-17.

"I don't know what [the players] think about [my contract], but my commitment during the first year, this period and the next one, there is no doubt about that," the 46-year-old told reporters at a news conference ahead of Saturday's FA Cup third-round tie with Burnley.

"I will be here one more year and after that we will see. It depends on whether we win and I deserve to extend my contract.

"I'm so, so happy here. But to extend your contract in the big clubs you have to win. If you don't win, you don't deserve to continue. I want to win."

On the players in question, negotiations with experienced Brazil midfielder Fernandinho – who claimed this week Guardiola had coaxed him to the best form of his career this season – are furthest down the line.

Talks with star man De Bruyne and striker Jesus, currently sidelined due to a medial knee ligament injury, are not at such an advanced stage according to their manager.

"My last news is 'Dinho is close, so close. Gabriel and Kevin, I don't know," Guardiola explained. "I think they made the first contacts but I don't know if it is close.

"Fernandinho, a lot of time ago we were handling that so I think it's at the end."

Guardiola maintains he will wait until next season to announce his future plans but he hopes the youthful nucleus of his squad stay around to propel City to greater heights.

"All the young players that we have, the managers [agents] the fathers and mothers all know we would like them to stay with us for a long time," he added.

"We want to build up something we started 18 months ago with these guys and want to continue with them."