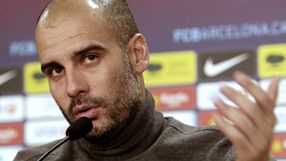 The Spanish and European champions host Chelsea on Tuesday needing to overturn a 1-0 deficit from last week's Champions League semi-final first leg and are on the brink of losing their domestic title after Real's 2-1 win at the Nou Camp put Jose Mourinho's side seven points clear with four games left.

Guardiola was on the receiving end of rare criticism after the loss to Real but gave a defiant and confident performance at a news conference before the Chelsea game.

"Whenever you suffer defeat you feel a bit low but afterwards you gain faith from analysing the facts.

"We are talking about very experienced players who have faced these kinds of situations many times before.

Chelsea and Real got the better of Barca by allowing them to dominate possession, defending solidly in numbers and looking to catch them on the break and Guardiola said he expected a similar scenario on Tuesday.

The 41-year-old, who has led Barca to 13 titles since taking over in 2008, was criticised for leaving Cesc Fabregas, Alexis Sanchez and Pedro out of his starting lineup against Real but defended his tactics.

"I have seen the match against Madrid and I really don't think we made mistakes," he said.

"I saw it this morning and I think we had control, I think we did a good job.

"We didn't have that many chances but it's very difficult with Real Madrid.

"We have a very distinctive way of playing and we have played like this for four years and as long as I am coach we will do the same.

"Our first and fundamental principle is based on kids playing the ball around and having fun. That's never going to change. The ball is the master of everything."

Guardiola said World Player of the Year Lionel Messi, whom Chelsea and Barca managed to prevent adding to his tally of 63 goals in all competitions this season, had missed training on Sunday because of gastric problems but had now recovered.

"Our mentality is that we are starting tomorrow with a 1-0 deficit and we have to overturn it, that's it," Guardiola said.

"In general I am always optimistic. The more successful you are the more demanding the job becomes and it's a challenge but it's a positive challenge."