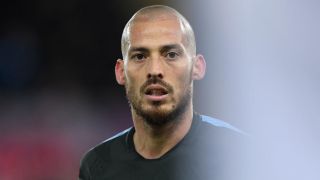 Silva returned to action on Tuesday after missing three of City's previous four Premier League games and turned in a man-of-the-match performance as Guardiola's runaway leaders saw off Watford 3-1.

Unspecified personal matters were initially put forward as the reason for Silva not playing against Tottenham, Newcastle United and Crystal Palace but the 31-year-old Spain international issued a statement on Wednesday explaining his absence was due to the premature birth of his baby son, Mateo, who he said was still receiving medical care and "fighting day by day".

"It's not easy for me to explain how he feels," Guardiola told a pre-match news conference.

"He made a statement and explained what happened. When he comes, he shows on the pitch he is able to forget everything.

"But of course, he decides when to stay and when to go back to Spain. I don't know [if he's available]."

Captain Vincent Kompany and teenage midfielder Phil Foden will miss out due to their respective calf and ankle complains, while striker Gabriel Jesus is on the mend from the medial knee ligament injury he sustained at Palace.

Guardiola will make a late call on Kyle Walker after the full-back limped off at the end of the Watford win with an apparent thigh problem.

That was City's second game in the space of three days, prompting their manager to claim English football's festive scheduling would "kill" the players.

He picked up the same theme on Friday but insisted his complaints were not a short-term gripe or a reaction to Jesus and Walker's setbacks.

"The schedule is what it is," he said. "The last press conference [after Watford] was not about Christmas or [playing on] Boxing Day, it's about the future for English football.

"We cannot play on the 31st and 2nd. All the doctors and physios say you cannot recover in 48 hours to play a demanding competition.

"Players in the Premier League are amazing athletes. The fact that they play every three days with tough weather, I admire them a lot. My experience as a player was completely different."

Guardiola added that he and other managers made the Premier League aware of their scheduling concerns at the start of the season, seemingly confident the dialogue is not fruitless.

"We have everything we need [in terms of training and medical facilities] to recover. But two days is not enough to save our players. See the injuries for players in all the teams. We give our opinion to the federation and they decide."