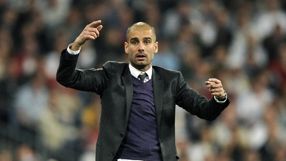 Barcelona coach Pep Guardiola may be absent for the leaders' match at home to Real Zaragoza on Saturday after he was admitted to a clinic on Thursday for treatment on a painful spinal disc hernia.

Guardiola was improving on Friday but remained under treatment and observation, Barca said in a statement on their website.

"His development over the coming hours will decide his availability to oversee the league match against Zaragoza at the Nou Camp," the statement said.

The champions can stretch their lead over second-placed Real Madrid to 10 points with a win ahead of Real's trip to Racing Santander on Sunday. Barca have 71 points from 26 matches, with Real on 64 and Valencia in third on 51.

Real have also been affected by injury. Joint La Liga top scorer Cristiano Ronaldo has been ruled out for 10-15 days after he damaged a leg muscle in Thursday's 7-0 thrashing of Malaga.

The Portuguese forward was forced off after he injured himself when scoring his third goal of the night to draw level on 27 goals with Barca's Lionel Messi.

Real's Argentina midfielder Fernando Gago is out for around three weeks after tearing a muscle in his right leg during training, the club said on their website on Friday.

Valencia winger Joaquin sustained a muscle injury in last weekend's 1-0 defeat at home to Barca and is doubtful for Saturday's game at Real Mallorca.

Atletico Madrid, who are eighth on 35 points, need a win at home to fourth-placed Villarreal on Saturday to get their bid for a European berth next season back on track.

"They are not scoring as many as last year and we are noticing their lack of goals," Godin told a news conference. "They are the ones who make the difference and who give the team a boost."

Villarreal occupy Spain's fourth Champions League qualification spot, a point behind Valencia on 50 and 10 ahead of fifth-placed Espanyol.

Midfielder Borja Valero, who made his La Liga debut at Atletico's Calderon stadium, said the club were looking to pull away from the chasing pack and take third place from Valencia.

"Finishing third would be the best prize we could get in the league," he said on the club's website.