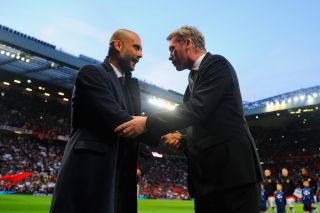 And the exclusive behind-the-scenes look at life in Bavaria by journalist Marti Perarnau revealed Guardiola's desire to work at Old Trafford, after the 45-year-old – coaching Barcelona at the time - scouted United in their 2011 UEFA Champions League semi-final against Schalke.

"I like this atmosphere. I could see myself coaching here one day," Guardiola said in the book.

Guardiola was tipped to succeed Alex Ferguson at Old Trafford once the Scot announced his retirement at the end of the 2012-13 season.

The former Barca boss had already promised to move to Bayern, while he was linked to United a year later following David Moyes' departure before Louis van Gaal took the reins.

Manchester City and Chelsea have also been strongly linked with Guardiola in the past, and the book reveals discussions were held between officials at both clubs and the two-time Champions League-winning coach.