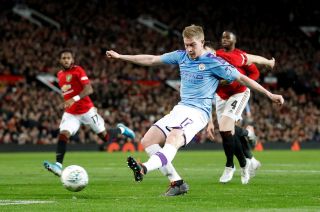 The Portugal international ran the show from a deeper position, scoring once and having a hand in another two goals as City raced into a 3-0 lead inside 38 minutes.

While the tactic was a common one for Guardiola at Barcelona, it has been used sparingly during his time at City, but De Bruyne said such is the way the manager prepares them they spent only quarter-of-an-hour in the morning of the game working on the set-up.

“We did 15 minutes on it in the morning, that’s about it,” said the Belgium midfielder, who said the players were only told of the team shape on the day of the game.

“We didn’t train that (on Monday), but it’s not like we never did it before – we did it sometimes against teams that prefer to play man-against-man – Cardiff, United, in Barcelona away we did it the first year with Pep, so we’ve done it a couple of times.

“With Bernardo dropping it is four against three in the midfield, so they have to choose what they do – if they put their defender up there is more space behind and if not Bernardo is going to be free and that is what we tried to do.

“I think overall we played well. The second half they tried to put a bit more pressure on us and we made one mistake and they scored from it.

Great performance and result but nothing is over! 90 minutes to play at the Etihad! 🔵🔵 pic.twitter.com/1J7OQbCW8b— Bernardo Silva (@BernardoCSilva) January 7, 2020

“I don’t think they had a lot of chances and I think we should have scored more but in the end 3-1 is a good advantage.

“We know it is not over but obviously it was a good game for us.”

Marcus Rashford’s goal 20 minutes from time gave United a lifeline they barely deserved and that was the main frustration on a night when everything else ran so smoothly.

It means the return leg in three weeks’ time remains in the balance, especially considering United won at the Etihad in the league a month ago.

Bittersweet to lead out my boyhood team for the first time but lose the game.— Marcus Rashford (@MarcusRashford) January 7, 2020

De Bruyne took responsibility for the goal, which came from City’s loss of possession in the centre-circle.

“It’s my mistake. I wanted to play to Rodri and didn’t see the United player. But it happens, we can always look at stupid mistakes – and we could have scored three or four more,” he added.

“We play that way and everyone knows there is space in behind us – it’s the risk we take in the way we play and it’s something we have to calculate.

“We minimised those counter-attacks and played well defensively and offensively.

“You try to be the best possible but always make mistakes in a game. We try to learn and minimise them.

“In the end you have to create the chances – another time we would score more, and we limited them, so that’s important.

“It isn’t done because I don’t think the rule of away goals is there so they only have to score two and that is always possible, but we prefer to start with a 3-1 advantage.”