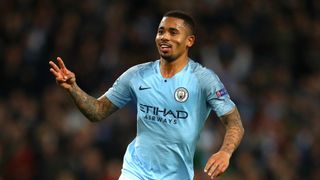 Pep Guardiola's disquiet over Manchester City supporters' standoffish attitude towards the Champions League has been well documented, meaning he must have taken up his position in the dugout for Tuesday's 6-0 rout of Shakhtar Donetsk with some trepidation.

It was set up to be one of the stranger evenings in City's strange relationship with Europe's top competition, coming as it did in the wake of allegations of financial impropriety that the Premier League champions have firmly denounced by insisting "the attempt to damage the club's reputation is organised and clear".

Among the series of claims made by German magazine Der Spiegel in an on-going series of articles drawn from documents purportedly acquired by whistleblowers Football Leaks is the accusation that UEFA cut City a favourable deal when they fell foul of Financial Fair Play (FFP) regulations in 2014.

At the time, City chairman Khaldoon Al Mubarak cast the club as put-upon victims of an old regime resistant to new-monied, sustainable ambition. This was significant as it tapped into already existing and legitimate sore points among the Etihad Stadium faithful when it came to European football's governing body.

The botched handling of racist abuse suffered by Yaya Toure against CSKA Moscow, culminating in a shoddily implemented behind-closed-doors punishment for the Russian club saw City fans respond by booing the Champions League anthem in the 2014 return game.

Lingering ill-feeling over FFP and the sense of a drawbridge being pulled up by the established elite also played a part. Such hostility has not sat easily with Guardiola as he aims for a third coaching triumph in a competition he cherishes.

This game followed three days of social-media amplified bile and whataboutery, where numerous defenders of the City cause put forward the spurious view that perceived unfairness in the rules their club agreed to follow would make flagrantly breaking them – as the strenuously denied allegations claim – perfectly acceptable.

It was a surprise, and one Guardiola undoubtedly welcomed, in the circumstances to hear the pre-match boos quickly dissipate.

By the standards of many Champions League group-stage encounters on this ground, there was an atmosphere of bounce and joviality. The South Stand rattled through the derby week repertoire – Manchester United are the next visitors this Sunday – after singing of "City, super City from Maine Road".

It was a brief reminder of the times a fanbase fuelled by their own gallows humour undertook dark days with dignity and good grace – qualities almost entirely missing from this week's discourse.

It was also a reminder that there was a football match to play. And Guardiola's City are really rather good at those right now.

Riyad Mahrez is increasingly in tune with his new boss' demands and calling upon the glittering magic that dazzled so brightly during Leicester City's feelgood title miracle, irrespective of the very different setting.

The Algeria winger made Yaroslav Rakitskiy look like a Sunday league amateur in setting up David Silva's opener.

If Mahrez has been finding his feet, Raheem Sterling is in glorious full flight. Well, apart from when he kicked the floor and fell in the 24th minute. Throw "Manchester City", "UEFA" and "scandal" into a search engine and you're probably as likely to find accounts of Viktor Kassai's decision to award a penalty at that point as anything Der Spiegel might have published lately.

Gabriel Jesus converted and did so again after Taras Stepanenko scythed through David Silva inside the final 20 minutes, by which point Sterling had brought the house down with his ninth of the season for club and country – a sublime strike from the edge of the box that gave Andriy Pyatov no chance.

Mahrez got the goal his endeavours deserved before the overworked Pyatov stood limply away from his line, allowing Jesus to chip his hat-trick goal - City's 50th this season. He might as well have come out waving a white flag.

The effervescent football Guardiola has made City's norm will continue to put thoughts of damaging allegations on hold for 90 minute portions. However City may or may not have done their business, on the field it remains business as usual.