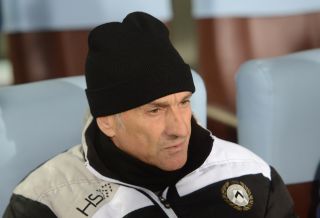 Maicosuel's goal after 32 minutes was enough for Udinese to stun Inter and advance to the quarter-finals.

With his team sitting a disappointing 13th in the Serie A, Guidolin wants to see them gain much-needed confidence from the surprise win.

"It was an excellent first half and it wasn't easy. We worked hard and ran a lot against an Inter side that changed system," he told a news conference.

"We controlled the game pretty well, considering we had more than one chance to finish it off.

"In fact, we should've finished it off, because if Inter had equalised then there would have been huge regret. Fortunately, we defended well.

"This victory means the team will gain confidence. Spirit made the difference more than just our physical efforts."

Guidolin was delighted his team produced a performance much better than the one which saw them slump to a 3-0 loss against Inter in November last year.

"Today we saw a team ready for battle, which wasn't the case in the league," he said.

"That was an ugly memory that I want to forget as soon as possible. Those two games were complete opposites, like night and day."