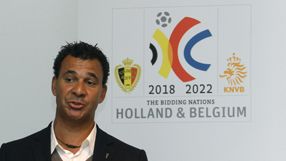 The former Dutch international also wrote off suggestions that his bid was the rank outsider and said he was not worried about recent events within FIFA which led to the suspension of two executive committee members, including one for bribery.

"We always go to the biggest countries and this is an opportunity for smaller countries to host it, especially because Netherlands and Belgium have been so important in the world of football," Gullit told reporters at the Soccerex conference in Brazil, which is staging the 2014 World Cup.

Gullit, who says the Dutch-Belgian bid is the greenest, also pointed out that the two countries were among the founding nations of world football's governing body in 1904.

"The fact that we are participating is because we believe in ourselves. We are the founders of the FIFA, we take football very seriously in our countries, in fact we take it even more seriously as we are small countries," he said.

"I just want to think about the fact we will win the bid," he added, brushing off the underdogs suggestion.

"If you don't think you will win, you don't need to participate."

The Dutch-Belgian bid has emphasised the compactness of the two countries and has offered free public transport, including two million free bikes, to help fans travel.

Organisers say matches would be played in 14 "truly green" stadiums.

England, Russia and Spain/Portugal are the other candidates to stage the 2018 World Cup with FIFA deciding the hosts in Zurich on December 2.

The right to vote is restricted to FIFA's executive committee and this was reduced to 22 members last Thursday when Amos Adamu of Nigeria and Reynald Temarii of Tahiti were suspended and fined.

Adamu, banned for three years for bribery, and Temarii, banned for one year for breaching rules on ethics and loyalty, were investigated following a report by British newspaper The Sunday Times which said they offered to sell their votes to undercover reporters.

The incident has cast a shadow over the whole bidding process.

"We just have to think about our own things," said Gullit. "I think that FIFA is a good and strong organisation that can resolve their problems internally.

"We're not going to think about what the others do, our bid is a good bid and on December 2 when we present our bid, we hope they will note our good points and vote for us."