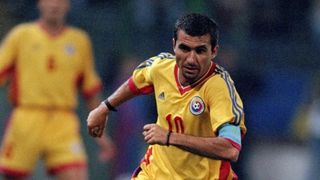 Gheorghe Hagi has tipped his 17-year-old son Ianis to break into Fiorentina's first team next season.

The Romanian football legend believes the teenager, who, like his father, plays as an attacking midfielder, is ready to make an impact in Serie A.

The teenager is currently on loan at Viitorul Constanta, the club owned by the Romanian great and where the younger Hagi started before Fiorentina purchased him in June 2015.

"Last year he made ​​his debut in our championship, he is maturing," Hagi told Corriere dello Sport.

"Now he is 17 years old and still has a long way to go before him. This year he has been named the best young Romanian player.

"He will play for Fiorentina. In the summer we will see if he is ready to come to Italy.

"In Romania it is easier to throw the boys in, because the league level is lower than in Italy."