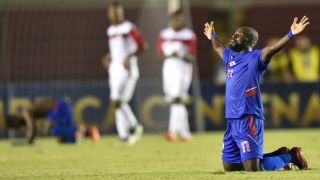 Haiti and Panama won playoff matches Friday to qualify for this summer's Copa Ameria Centenario in the United States.

The four sides were the best finishers at the 2015 Gold Cup not already qualified for the Copa, which will be contested by all 10 members of CONMEBOL and six members of CONCACAF.

Haiti topped Trinidad and Tobago 1-0 in the opening match of the doubleheader. It was a labored affair, with Trinidad and Tobago starting fast but fading after a bright opening period. Haiti finally found the breakthrough when Jacksonville Armada midfielder Pascal Millien, who came on as a sub, whipped in a dangerous cross in the 83rd minute. The ball went in toward forward Kervens Belfort who got a very light touch on it with his outstretched leg, but celebrated with enthusiasm as the ball found its way across the line for the match's only goal.

Friday's contest was new manager Patrice Neveu's first with Haiti after Marc Collat's contract was not renewed. Haiti lost both of its World Cup qualification matches in November and Collat had made several acrimonious statements about Haitian players.

It was easier for Panama, which topped Cuba 4-0 in the night's second match. Gabriel Gomez opened the scoring in the fourth minute, heading in a free kick from Valentin Pimintel.

The hosts added another in the 18th minute with Luis Tejeda converting a spot kick after Blas Perez was fouled in the box to extend the lead to 2-0.

Tejeda turned provider in the second half, taking the ball at the top of the box and moving it to Amando Cooper on his right. Cooper fired a right-footed shot past Cuba goalkeeper Sandy Sanchez for the third goal of the match. Blas Perez put a cap on the match, rising high to knock a cross from Luis Henriquez past Sanchez.