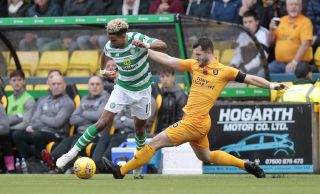 The defender will join Hearts in the summer and sat out Saturday’s 1-0 defeat to Dundee with a groin injury.

The Almondvale side round off their Ladbrokes Premiership campaign against Motherwell and Holt says he won’t risk Halkett for a meaningless game.

He said: “I think Craig probably has played his last game for the club. He has signed a pre-contract with Hearts and I am not going to jeopardise that for him for the sake of one match.

“We have nothing to play for and he has a long career ahead of him. I’m making that decision but Craig has been honest.

“He said in the last day or so that he wasn’t right – and this is a guy would play with a broken leg. Craig took responsibility and said he’s really sore in the groin area. Rest is the best cure and this is a good time with the summer break coming up.”

Dundee manager Jim McIntyre will meet with the club’s managing director John Nelms on Monday for talks on his and Dundee’s future following relegation to the Championship.

They managed to end a sequence of 10 successive defeats with victory on Saturday and McIntyre was pleased to see his players finally getting their rewards after a difficult spell.

He said: “All we could do here was be professional and try and restore a wee bit of pride by winning the game and we’ve done that.

“We created some decent opportunities on a pitch which was sticky and didn’t help the game to flow. All in all, I’m really pleased that we managed to win the game.

“The one accusation I can’t make is a lack of application. We’ve always had that – it’s our lack of quality that’s let us down at key moments in games and we’ll hold our hands up for that.

“I was really delighted for the players because it’s been a difficult week and it’s a horrible feeling (being relegated), not one I want to experience again. I’m just glad we stopped the rot.”