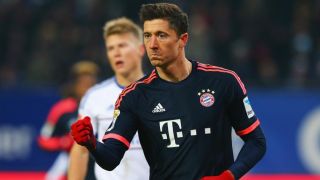 Robert Lewandowski moved on to 50 Bayern Munich goals as his double earned a 2-1 win at Hamburg on Friday to mark the return from the Bundesliga's mid-season break.

Pep Guardiola's team have handed Hamburg six emphatic beatings by five goals or more since 2011, but they were made to work much harder this time around.

Lewandowski gave Bayern a first-half lead from the penalty spot, but a Xabi Alonso own goal shortly after the break had the match briefly in the balance.

However, an instinctive finish by Lewandowski gave the away side a narrow victory that moves them 11 points clear of Borussia Dortmund, who play Borussia Monchengladbach on Saturday, at the top of the table.

Hamburg, meanwhile, have only won one of their last eight home matches in the league and remain 10th in the table.

Hamburg did well to restrict the visitors' space in the early stages and almost took the lead themselves when Dennis Diekmeier struck narrowly wide from just outside the penalty area after a purposeful run.

Bayern had been unable to create any clear-cut opportunities until the game changed with a 37th-minute penalty.

Thomas Muller got to Lahm's bouncing pass before goalkeeper Rene Adler, who rashly charged off his line and made contact with the forward just inside the box.

Lewandowski stepped up to take it and confidently sent Adler the wrong way.

Referee Felix Zwayer denied Muller another penalty soon after when he went down under pressure from Cleber, before the Germany forward headed just wide from Thiago's free-kick.

Bayern made a strong initial start to the second half, with Kingsley Coman and Lewandowski both forcing Adler into low stops, but Hamburg drew level in the 53rd minute.

Aaron Hunt clipped in an accurate free-kick and Alonso diverted the ball past Manuek Neuer from six yards as he attempted to prevent Pierre-Michel Lasogga from converting.

Jerome Boateng then limped off to be replaced by Javi Martinez, but Bayern got back on track just after the hour mark.

Muller chested down and drove in a shot from the edge of the box and Lewandowski reacted by prodding out his left boot, wrong-footing Adler and just beating the offside trap to net his 17th league goal of the season.

It was almost game over shortly afterwards when Alaba struck a brilliant dipping set-piece from almost 30 yards that struck the post, while Adler inadvertently saved a deflected Thiago effort that looked destined to find the net.

But Bayern held on with relative comfort to win a potentially key match in their title bid having suffered defeat in their first match back after the break in two of the previous four seasons.