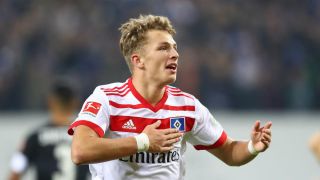 Hamburg have renewed the contract of hot prospect Jann-Fiete Arp.

After years of battling for survival Hamburg suffered a historic relegation last season, having previously been the only ever-present Bundesliga team since its inception in 1963.

However, despite this setback, they have been able to cling onto prized asset Arp.

The 18-year-old was a shining light in 2017-18, appearing 18 times and becoming the first player born in the 21st century to play and score in the German top division.

It was believed that Bayern Munich had been on the verge of buying the youngster, who has scored 18 times in 19 games for Germany's Under 17 squad.

However, he has now put pen to paper on a deal through 2020, committing to the clubs 2. Bundesliga campaign next season.

"Leaving this club was never an option for me,'' Arp told HSV.de.

''Especially in such a hard time - I cannot and did not want to leave HSV, but give the club back what it deserves. That's why it was clear to me early on that this path here at HSV has not ended for me yet."