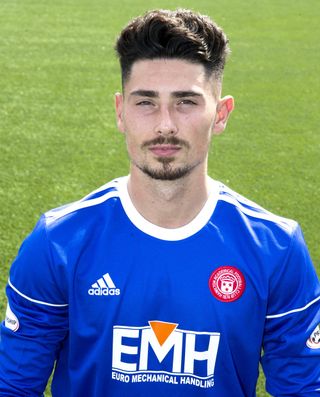 Hamilton goalkeeper Luke Southwood is ready to make his voice heard after losing skipper Brian Easton ahead of a crucial encounter against Hearts.

Experienced defender Easton has been ruled out for up to 12 weeks after dislocating a shoulder in Tuesday’s 3-1 defeat by Aberdeen.

Easton was replaced by Shaun Want to join two other 23-year-olds and a 21-year-old in the Accies defence with Southwood himself just 22 and in his first season in league football.

Hamilton travel to Tynecastle looking to keep their opponents bottom of the Ladbrokes Premiership and Southwood knows they need to stand up and be counted.

The on-loan Reading player said: “We know what a big loss Easty is, he’s a really good player and a good leader and character to have in the changing room.

“So losing him is a big blow but it’s a good opportunity for me and other players to step up and show that we can lead as well in our performances and our communication.

“As the goalie it’s your job to take charge of the back four and the defensive-minded players.

“It’s definitely something I need to challenge myself to do in the upcoming games if there’s going to be new players coming in.

“It’s important for everyone in the back four to communicate and keep things organised.”

Accies are looking for their second win over Daniel Stendel’s Hearts and Southwood knows it would be a major lift after losing to Celtic, Rangers, Hibernian, Livingston and Aberdeen in 2020.

“After a disappointing game on Tuesday we don’t need to be told how big a game this is for our season,” he said.

“When we beat them at home before Christmas it was a really good day and gave us a lot of confidence going into the Motherwell game as well.

“So it would be massive not only for the table but also future games.

“It has been a tough run but we knew it was coming. It’s good to play in those big games but sometimes it can get you into a mentality where it feels like you are losing all the time.

“So it will be good to play some games where we feel we have a really good chance in, starting on Saturday against Hearts.”