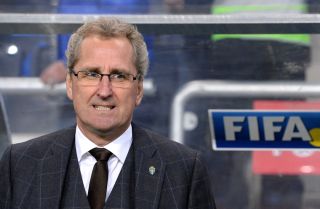 The hosts took a two-goal lead in their final Group C game in FIFA 2014 World Cup qualifying courtesy of Tobias Hysen and Alexander Kacaniklic before strikes either side of half-time from Mesut Ozil and Mario Gotze brought Germany level.

However, Hamren was angered after Swedish defenders gave the ball away for Andre Schurrle to score the first two goals of his hat-trick and put Germany in control.

"I am happy with many parts but we offered Germany two goals," Hamren told TV4.

"Then it becomes clearly harder for us. Overall I think we are trying to do what we do but their (goals for) 3-2 and 4-2 is too simple.

"Should you win a match against a world-class team like Germany, (you) must be 100 per cent in what you do. You have to show courage."

Sweden were already guaranteed their play-off place prior to the game in Stockholm.

Hamren refused to select any preferred opposition ahead of Monday's draw, insisting his side have nothing to fear as Sweden seek a place in the finals next year.

"I will not say which team I prefer, but nothing is impossible," he added.