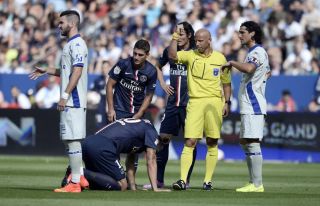 Ibrahimovic lasted just 16 minutes of Paris Saint-Germain's 2-0 victory over Bastia in Ligue 1 on Saturday, with the French champions later confirming he had suffered a partial tear to a rib muscle.

Some reports have suggested the 32-year-old, who arrived home in Sweden on Wednesday after being granted time away by PSG to recover, could miss the next six weeks.

Such a spell on the sidelines would not only rule Ibrahimovic out of Sweden's international friendly with Estonia early next month, but also the country's opening Euro 2016 qualifier against Austria on September 8.

However, Hamren remains optimistic about his skipper's recovery.

"I myself have not talked to him, but I have people in management who have it and we have a good handle with Paris," Hamren told Swedish newspaper Expressen.

"My hope is that it is not as serious as it might have speculated in the media.

"With the information I have received, I hope that it will be quickly, even in Paris as well."