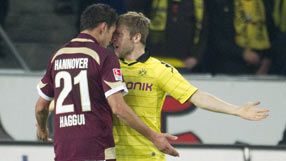 The Tunisia international was sent off in the 77th minute with a straight red card after Dortmund substitute Blaszczykowski fell in the area and Haggui angrily turned around and aimed a kick at his head after he urged him to get up.

Dortmund won 4-0 and lead the Bundesliga by four points after 11 games.

Haggui will be eligible to play in his team's last match before the winter break on December 18 against Nuremberg.