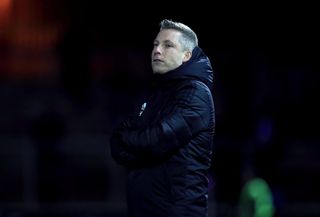 As play continued during the first half, an announcement was made over the public address, warning the “away fans” to desist from their alleged racist and homophobic behaviour.

The Welsh club later posted a statement on their official website which read: “Cardiff are aware of the allegations made against visiting supporters at the FA Cup tie at Reading.

“We will be speaking with Reading, Thames Valley Police and South Wales Police (in attendance with our travelling support) to ascertain the facts of the matter. We will conduct these conversations with the relevant authorities before making any further comment.”

Cardiff had gone ahead in the fifth minute of the fourth-round tie when Callum Paterson fired home from close range.

Yakou Meite levelled three minutes later with his seventh goal of the season and Reading defender Tom McIntyre was sent off in the 81st minute for a second bookable offence.

Cardiff skipper Sol Bamba then somehow contrived to head wide from almost on the goal-line.

“We as a football club work extremely hard behind the scenes (to combat racist and homophobic behaviour),” Harris said.

“For me, it’s not about Cardiff City today or Reading or whoever. It’s about society and football in general.

“I’ve said it before and I’ll say it again. We have to make sure that, as a society in a football industry, everything is correct.”

Referring to the result, Harris said: “We deserved to win the game over the course of the 90 minutes.

“We got our noses in front and we had enough chances in the first half and second half to win the game.

“I wanted to avoid a replay, of course, but when you come away in the cup, you sometimes have to settle for a draw.

“We’ll try to put that right in the home replay.

“With Sol’s header, I couldn’t believe it. I thought it was in.”

“No one likes to hear it. We had it at Millwall the other week and you just hope and pray it’s not creeping back into football.

“Nobody likes to hear it and it needs to be stamped out.”

Of the prospect of a replay, Bowen said: “Neil (Harris) is the same as me. But you just have to dust yourselves down and go again.

“I’m like a fan. You want to be there listening to the draw for the next round of the cup and feel that your team is still in there.

“We’ve done that. We’ve not got through the tie but we’re still in the hat.

“We had a really young side out there. We had to stand up and be counted and I thought that we did that fantastically well.

“When we got the ball down, we tried to create chances. I’m very proud with how we played and what we did.”