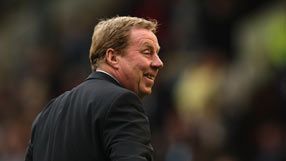 A masterclass from Gareth Bale helped Spurs beat Champions League holders Inter 3-1 and take a giant stride towards the last 16 on a memorable night at White Hart Lane.

And on a tumultuous occasion that rekindled golden memories of the famous ‘Glory Glory’ nights in North London, Redknapp hailed the efforts of the whole team.

“To beat Inter Milan here at White Hart Lane was a night to remember,” he said. “It was an amazing performance from every single one of them.

“We played unbelievable. We pressed them, worked them, and outplayed them, creating all the chances. The whole team just put in an amazing performance.

“It’s something all Tottenham fans can look back on and I was just pleased to be a part of it.”

Bale ran Inter ragged time and again with his performance laced with unstoppable power, pace and a devastating end product that left Inter without any answers.

And Redknapp was quick to give the Welshman his due, in a somewhat light-hearted fashion.

“They’re just doing some drug testing on him now!” joked Redknapp. "It’s amazing the way the boy can run and run against a right-back [Maicon] who is rated by everybody as the best in the world.

“What he’s done over the two games has just been incredible. He’s got everything really. He’s got the ability to keep running, to cross the ball, the ability to shoot, dribble and head it and he’s fantastic on the run. On top of that, he’s also a great lad.”

Van der Vaart said: “Gareth’s great. I think he's one of our best players. Maicon is one of the best defenders in the world, and he killed him today. The whole club, we have to keep this guy.”

Tottenham now sit joint top of Group A with 10 points from four games. A win in matchday five at home against Werder Bremen would see the London club through to the last 16 of the competition for the first time in their history.

But Dutch playmaker Van der Vaart, who was forced off at half-time through injury, played down his team’s strong position.

“It's a special night for everybody, but it's just a game,” Van der Vaart said. “It's only three points and we must keep our focus.

“My hamstring needs a few days off, but I was good enough to play 45 minutes and we played fantastic for the whole game.”