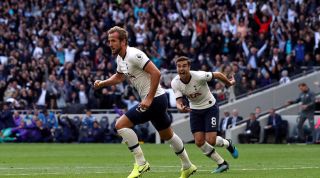 The striker is now in his sixth full season as a Spurs regular but it still awaiting his first piece of silverware.

Tottenham reached the League Cup final in 2015 and finished second in the Premier League in 2016/17, before losing 2-0 to Liverpool in last season’s Champions League final.

Mauricio Pochettino’s men were eliminated from the League Cup last week and are already 10 points adrift of top spot in the Premier League.

And after a 7-2 demolition by Bayern Munich in the Champions League on Tuesday, Ferdinand believes Kane should seek pastures new.

“And then you ask yourself the next question, ‘Do Spurs look like a team capable of winning trophies?’ I don’t think so, no. I think they were a better team probably a couple of years ago.”

Ferdinand himself left West Ham, whose academy he graduated from, for Leeds in 2000, before later taking another step up to Manchester United two years later.

And the ex-England international believes the current Three Lions captain must confront the issue sooner rather than later.

“I had the opportunity to go. I made a very quick decision to go and win trophies,” Ferdinand said.

“Harry Kane is probably thinking about it and having those questions. They need answering soon. He’s 26 and you only have a small window of opportunity, they come and go very quickly.”

Tottenham will be looking to bounce back from their humiliation by Bayern when they meet Brighton on Saturday.