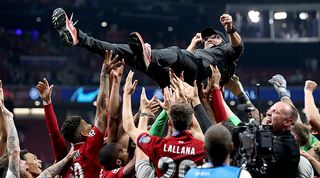 Seb Stafford-Bloor will be writing a new daily column on FourFourTwo.com – and this is his first instalment. Enjoy...

There are very few clouds in Liverpool’s sky. Reigning European champions and currently perfect in the Premier League, they appear to be on a smooth curve towards an unprecedented modern peak.

If there is a storm front approaching, though, it’s in Joachim Low’s increasingly tenuous position as Germany’s head coach. That disastrous group stage exit at World Cup 2018 has been followed by Nations League relegation and, most recently, a humbling defeat in Hamburg to Ronald Koeman’s resurgent Holland. There may be no question of Low’s immediate job security, but this is evidently a cycle at an end and, when that point does arrive, Jurgen Klopp will top the list of potential successors.

It’s a job he would presumably covet – indeed, his agent has admitted as much recently – but not one to which he’d be obviously suited. Why? Because of the nature of international football, and its limiting effect on strong personalities.

Part of Klopp’s success depends on his ability to light cold boilers and create fire where it should be. At Liverpool that’s certainly been the case. In Bring The Noise, Raphael Honigstein’s excellent biography, there’s a descriptive scene painted during his initial interview with FSG, when the German tells his future employers of his desire to ‘activate’ the Anfield atmosphere.

In hindsight, we not only know exactly what he meant, but also the worth of what he was trying to create. Anfield sounds different now; it has that febrile roar which other grounds in England don’t and which, conveniently, amounts to a sonic description of Liverpool’s playing style.

NEW ISSUE!Jurgen Klopp exclusive: a unique insight into the man behind the manager

Klopp created that. In what order is subjective, but it’s a synergy which lies at the heart of Liverpool’s architecture. That isn’t to say that the club’s growth under Klopp hasn’t been a tactical or technical success, but that – first and foremost – it has been led by personality.

One of the key differences between club and international management is the level of involvement. Whereas a national team’s head coach is a subliminal figure, borrowing players and aligning them every couple of months, working for a club is more like the role of a parent. The nature of the relationship is different. The every day grind of the domestic season encourages bonds to grow in a way that the sterile world of international football never can.

What that enables, in this instance at least, is a player-coach relationship which underwrites everything else. It’s semi-cultish: Liverpool are a team full of players operating beyond their presumed limits, running harder and further than they’d like, but never questioning why. That’s the fibre of Klopp’s football. It’s not the counter-press, the sprints per game, and it’s not even the dramatic improvement in individual players. Those are just manifestations. Instead, what matters is the indoctrination – the ability to create that unthinking, unblinking commitment in the first place.

The conditions required to do that are very specific. Could Klopp’s message have been imparted in the same way at Chelsea or Manchester City, for instance, where the air is cooler and success has become an assumed right? Or Arsenal, where there are so many neuroses in the atmosphere? Clearly it would have been different. It might have looked vaguely similar, but it’s hard to imagine an equivalent crescendo.

Liverpool were the right club for him in a very precise way. They had the right history, the right view of themselves, the right financial inferiorities. Even the city itself was ideally insular and, in conference, those factors made the club incredibly susceptible to Klopp’s virtues.

But nations don’t have that kind of vulnerability. Because of the separation, of course, and the impediments caused by unavoidable distance between a manager and his squad, but because a head coach can never define a country or alter its DNA. A club is defined by its seasons, its cups and its goals, but a country's outline is drawn by its industry, its population and its politics.

So while Jurgen Klopp can be Liverpool, he can’t become Germany. There are no boilers for him to light – and that’s a problem to ponder if and when this question arises.