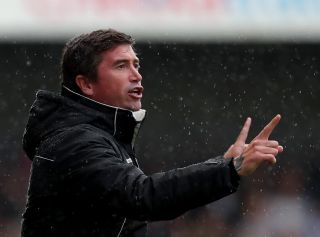 Harry Kewell has called for stability at Boundary Park after becoming the sixth Oldham manager in under two years.

The former Leeds and Liverpool striker has signed a one-year deal at the Sky Bet League Two club, with an option to extend.

Thank you for all of the kind messages. I’m delighted to have signed as Head Coach for @OfficialOAFC. Looking forward to the challenge ahead. pic.twitter.com/dbpZO12QsN— Harry Kewell (@HarryKewell) August 1, 2020

“I’m excited about the project and, don’t get me wrong, it’s going to take time,” Kewell, 41, told the Oldham club website.

“Because the one thing I think this club does need is stability and if we can get that, then we can start to grow things.

“We’ve got to get back to the basics and we’re having a ‘clean slate’ here now and I think the fans, myself, the owner, everybody wants to start seeing this club progress because we all believe that’s there’s a big potential.”

The Australian made just short of 400 appearances in a distinguished 18-year playing career before moving into coaching in 2015.

Kewell was an under-23s coach at Watford before spells in charge of Crawley and Notts County in League Two.

Oldham were 19th in League Two when the season was halted in March because of the coronavirus pandemic.