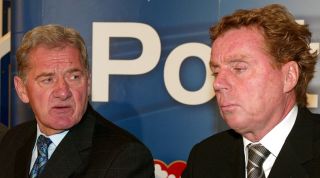 Harry Redknapp has admitted that he should not have left Portsmouth for their arch-rivals Southampton in 2004.

The two south coast sides will renew hostilities in the third round of the EFL Cup on Tuesday.

Redknapp swapped Fratton Park for St Mary’s 15 years ago, after falling out with Portsmouth chairman Milan Mandaric over the appointment of Velimir Zajec as the club’s director of football.

RECOMMENDED Why Portsmouth vs Southampton is more than a game: featuring navy larks, skates and scummers

The future Tottenham boss spent a year at Southampton but was unable to prevent them from dropping into the Championship in 2004/05.

He returned to Portsmouth midway through the following campaign, before leading them to FA Cup glory in 2008.

And speaking exclusively to FourFourTwo (issue 303), Redknapp says he should never have taken the Southampton job.

“I fell out with Milan Mandaric at Portsmouth. I’d got into my car to drive home one day, and suddenly I had four phone calls from the press saying, ‘I see you’ve got a director of football coming tomorrow?’

“The next day, I got to the training ground and this guy was there, Velimir Zajec. I went back to Milan, who’d told me, ‘No one’s coming in.’ We had a row and I quit.

“Soon after, I got a call from Southampton. I lived down here, so why shouldn’t I work? It was a crazy move. I didn’t realise the hate between them.”

Redknapp was labelled a traitor by Portsmouth fans for accepting Southampton’s offer, although they eventually forgave him following his return to Fratton Park.

And the 72-year-old says it was impossible to escape the abuse after his move to St Mary’s.

“At home, I’d be outside and the boats that went past always seemed to be fishermen from Portsmouth. They would go past, a big gang of them on their boats going out through the harbour, yelling abuse.”

Redknapp’s last managerial job came with Championship side Birmingham in 2017.