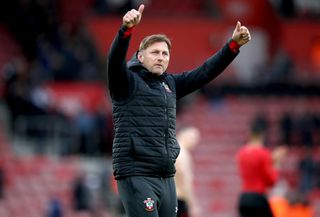 Southampton boss Ralph Hasenhuttl intends to make sure his team finish where they deserve to in the Premier League next season after a what will be a first full campaign in charge.

Austrian Hasenhuttl has overseen some turnaround at St Mary’s Stadium, having inherited a side in early December which had managed only one victory from the opening 14 league games under Mark Hughes.

With top-flight football guaranteed following last weekend’s 3-3 draw with Bournemouth, Hasenhuttl intends for his team to hit the ground running when the 2019/2020 campaign begins again in August.

“If we make a few good signings in the summer and have a good start next season, we are in an area of the table that feels easier to develop the guys because you don’t have that much pressure, and then you never know what happens,” the Southampton boss said.

“Our first target is always to come as quickly as possible to 40 points and if we reach that, we can think about other targets.”

Hasenhuttl added at a press conference broadcast by the club: “At the end of the season you get what you deserve.

“This year we deserve to be 16th or 15th maybe, but no more, because for the whole year that was what we deserved to get.

“Next year, if you play better from the beginning and consistently take points, maybe you get more for this. I am not the guy who feels comfortable if I am seventh or eighth.”

Hasenhuttl is expected to look to strengthen the squad over the summer, with £15million-rated Birmingham forward Che Adams one of a reported number of transfer targets.

“I think everybody knows that, although we are following the ‘Southampton Way’, it is not possible to be successful without signing players,” he said.

“That is only possible with money. We will spend money, that is for sure, but how much we spend depends on how much we get for the players we sell. That is also important.

“I guarantee we will try to bring players here who see us as the next step in their development.

“That is the most important goal we have – that they are not too old, they are signing their first or second contract and they see us as a big chance to show up in the Premier League.

“If they are hungry and want to hunt, then they are welcome and can help us to develop this club.”

Saints travel to West Ham on Saturday to tackle another side who will be looking for upward progress next season.

“We have to find a good shape in this game. Tactically they are very committed and against Tottenham you see how much quality they have in the team – good attacking players with speed,” Hasenhuttl said.