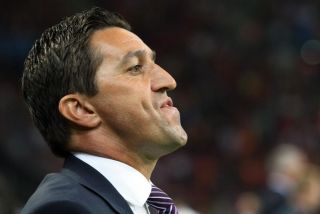 The Pro League champions came away from the Turk Telecom with a 1-1 draw in their UEFA Champions League Group D opener.

However, it could have been so much better after Dennis Praet's 52nd-minute goal gave them a deserved lead.

Aleksandar Mitrovic then missed a fantastic opportunity to double the lead a couple of minutes later and Galatasaray punished the visitors, with Burak Yilmaz netting a dramatic equaliser in stoppage time.

Hasi acknowledged that before the match he would have been content with a point, but feels his young side's lack of experience proved to be their downfall in the dying seconds.

He said: "Galatasaray's chances came from risks I took. I was thinking before the game that one point would be good, but after the game I'm sorry we didn't get the three points.

"I think we were the youngest starting XI in the Champions League. This team is playing very good, but these are the mistakes young teams make."

Hasi also rued Mitrovic's missed chance just after Praet's opener and, despite dropping two points as a result, the Albanian coach was pleased with the manner in which his side approached the game.

He added: "We came here to play football, we're not here to sit back and defend.

"We wanted to win this game. If you've watched the first half [by itself], it would have turned out differently.

"We played the same football in the second half, [but] we missed a crucial opportunity with Mitrovic.

"All my team gave a lot physically. In the last 20 minutes at 1-0 we had the instinct to protect [the lead]. We're sorry we lost two points."