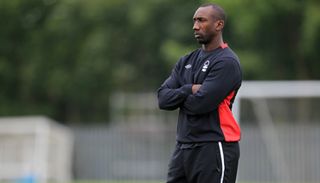 "This is a fantastic club that has been underachieving for several years," Hasselbaink told the club website. "Our first goal is to challenge for promotion and build from there."

The 41-year-old Dutchman was on the coaching staff at English Championship club Nottingham Forest until January but Royal Antwerp will be his first management job.

Antwerp won the Belgian league title four times before being relegated to the second division in 2004.