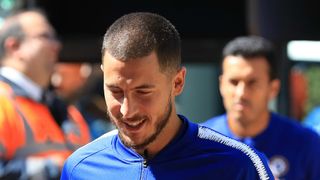 Eden Hazard will make his first start of the season for Chelsea away to Newcastle United, while Mateo Kovacic has been handed a full debut by Maurizio Sarri.

The Blues head coach indicated in his pre-match news conference both players were ready to start but would not be able to complete the full 90 minutes.

Belgium international Hazard has come off the bench in each of Chelsea's first two Premier League matches of 2018-19, with Sarri's side taking maximum points.

Former Chelsea boss Rafael Benitez is without captain Jamaal Lascelles and star midfielder Jonjo Shelvey due to injury, though media reports have suggested the former has fallen out with the Spaniard.

Kenedy, after last weekend's disappointing performance in the 0-0 draw at Cardiff City that included failing to convert a late penalty, is ineligible to feature against his parent club.

Newcastle have won four of their last five home Premier League matches against Chelsea, who they beat 3-0 on the final day of the 2017-18 campaign.

TEAM NEWSHere's how Newcastle United will line up for this afternoon's game against . August 26, 2018