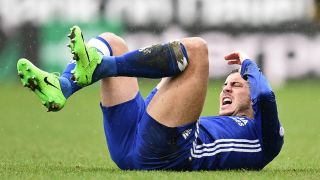 Eden Hazard has a "little problem" ahead of Chelsea's Premier League encounter at West Ham on Monday, but head coach Antonio Conte is confident the injury is not serious.

The Belgium forward received a kick in training this week during the league leaders' preparations for the visit to London Stadium.

Conte did not confirm whether Hazard will be fit for the match, but the Italian does not foresee any long-term problems.

Asked to report on Chelsea's team news, Conte told a news conference: "Nothing important apart from a little problem for Eden, he got kicked but I think nothing serious and the rest of the team is good and we are working very well.

"[He was hurt] in training when we started on Wednesday, he got a kick. I don't remember who kicked him. It is nothing serious I don't think."

Conte says Eden Hazard has a 'little problem' after getting a kick in training on Wednesday, but he thinks it is nothing serious. March 3, 2017

Conte also addressed fresh rumours that Michy Batshuayi, twice linked with a move to West Ham, is set to depart the club at the end of the season.

Batshuayi arrived at Stamford Bridge from Marseille in the close season but has struggled for regular football, with all of his 16 Premier League appearances coming from the bench.

And Conte warned the Belgium striker that he must prove he is worthy of a place in Chelsea's starting line-up.

"It's important now, I repeat, when you ask about my players the most important thing is to live in the present, work hard in the present and then at the end of the season we look at the situation of every single player," he added.

"Now, he's working very well for us, he must continue to work, anything can happen. If he shows me he deserves to play I'm ready to put him in the starting XI. If that doesn't happen we continue in this way."

One player who has been a regular under Conte is wing-back Victor Moses, who has finally established himself at Chelsea having spent the majority of his five years at Stamford Bridge away from the club on loan.

Moses this week extended his stay at Chelsea until 2021, a deal that Conte says the Nigeria international fully deserves.

"It's right to say Moses deserves a new contract, he is a really good guy – a good player with great technique and desire to fight," he said.

"When I saw him during pre-season I was very pleased with him, I told him to stay all season, and he told me he wanted to stay, prove himself and that he was ready to play for Chelsea.

"No-one person gifted him anything, he deserved it."