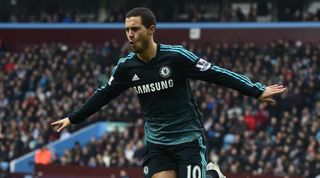 Hazard has scored 13 goals for Chelsea this season, helping them open up a seven-point lead at the top of the Premier League and secure a place in the League Cup final.

Stamford Bridge boss Jose Mourinho had joked earlier in the week that delays in tying the Belgian down to a new deal were down to him, and any fears that may have been brewing among the Chelsea faithful have been put to bed.

"I am very happy to sign a new contract with Chelsea," Hazard told the club's official website.

"Since I came here in 2012 I have always felt good and the club has been very supportive to me.

"The manager has helped me improve a lot, the fans have been fantastic and I have an amazing understanding with my team-mates.

"I always try to give pleasure to the supporters with my style of play and it is nice to know they appreciate my work.

"I hope we can repay that support by winning lots of trophies, beginning with the Capital One Cup at Wembley, and after that, we can push hard towards the end of the season."

Hazard was named Player of the Year at Chelsea last season, though Mourinho claiming that the attacker was not "ready to sacrifice himself 100 per cent for the team" in the aftermath of their UEFA Champions League defeat to Atletico Madrid led to reports of tensions between the two.

Paris Saint-Germain were reportedly keen on a move if Hazard, 24, were to leave London.

However, after returning for the current season wearing Chelsea's number 10 shirt, Hazard has shone and Mourinho paid tribute to his impressive development.

Mourinho added: "I am very happy that Eden has signed a new contract. It shows he believes in the club's coaching staff and players to help him become the best player in the world.

"He is already a top player and his evolution has been fantastic. He is still very young and he can become the best."