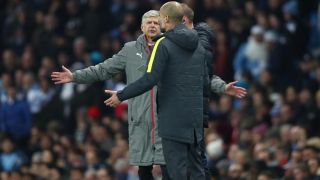 Arsenal manager Arsene Wenger dismissed suggestions Pep Guardiola has raised the bar in football over the past decade.

Guardiola's Manchester City are on track to win the Premier League and face Wenger's men in the EFL Cup final Sunday.

The Spaniard has enjoyed plenty of success with the likes of Barcelona and Bayern Munich during his coaching career, including winning two Champions League titles.

However, asked if Guardiola had raised the bar, Wenger played down the 47-year-old's impact.

"No, because you look at Barcelona and they are still the best team in Europe," he told UK newspapers.

"You have to accept that the modern game has changed with the recruitment of the best players in a short number of clubs.

"We, as managers, can maybe impart our philosophy but this game belongs to the players because the importance of the players has become bigger than ever before."

So boss, what's the key to beating Manchester City?February 23, 2018

Wenger believes his team's history counts for something heading into the decider against City at Wembley.

"When you come through such a long way, you go to the final, you don't want to lose it," he said.

"You want to win it. At the end of the day, you have to be cool. Because Manchester City is dominating the league in the head of everybody and so maybe we are more underdogs than in the FA Cup semi-final [last season, which Arsenal won 2-1].

"We are maybe underdogs but we have to believe in our quality. The history, the fact we have done it before, shows why not do it again?"