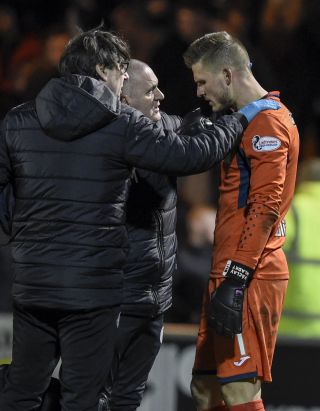 Grief-stricken St Mirren goalkeeper Vaclav Hladky will face Motherwell on Saturday and help in Saints’ battle to stay in the Ladbrokes Premiership.

The Czech keeper is mourning the death of best friend Josef Sural who was killed when Turkish club Aytemiz Alanyaspor’s minibus crashed after a match on Sunday evening.

With three fixtures remaining, the Buddies are seven points ahead of bottom side Dundee and two behind Hamilton, as they prepare to for the trip to Fir Park.

Boss Oran Kearney, who will be without attacker Anders Dreyer who has returned to parent club Brighton with a knee injury, will have Hladky between the sticks.

He said: “It has been a really tough few days for him. We have had quite a few conversations with him and all we can do at this time is pass our sincere condolences on to the family.

“He was Vaclav’s best man at his wedding so they were obviously very close and had a very strong friendship.

“He absolutely wants to play at the weekend. I think the funeral is next week and I will give him plenty of time to go and do that.

“It is his choice, he is adamant that he is keen to play on Saturday. He is a great guy and a really good pro.

“I appreciate where he is at and I think he is appreciative of where we are at as a club and the journey we have been on and he is adamant that he wants to do his bit on Saturday before he goes back on Sunday.”

Dreyer, 21, joined St Mirren on loan in January but pulled up in the 1-1 draw against St Johnstone at the weekend.

Kearney said: “Anders Dreyer is away back to Brighton, he is finished for the season.

“He hurt his knee after 12 minutes on Saturday, played on until about 60 minutes and he woke up the next day with a swollen knee.

“We got it scanned and it looks like a bit of damage to the cartilage.”