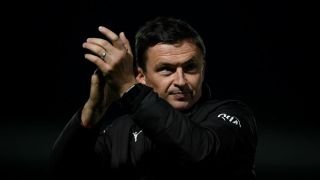 The 40-year-old has agreed an 18-month deal at Elland Road and succeeds Thomas Christiansen, who departed on Sunday on the back of a 4-1 home loss to Cardiff City.

Leeds are seven points off the play-off places and lie 10th in the Championship, having taken two points from six games, while they were dumped out of the FA Cup by fourth-tier Newport County.

Heckingbottom led Barnsley to promotion from League One via the play-offs in 2015-16, also collecting the EFL Trophy, and secured a creditable 14th-place finish last season.

In a club statement, Barnsley described his decision to join their Yorkshire neighbours as "thoroughly disappointing".

"The club are shocked at Paul Heckingbottom's desire to leave, having agreed a new contract last week following the completion of the transfer window, where the directors worked tirelessly along with Paul to secure their targets, resulting in a successful window," the statement read.

"This left the club optimistic in a turnaround in form and a strong end to the 2017-18 campaign as we battle to retain our position in the league."

Heckingbottom's first game in charge will come when Leeds travel to face Sheffield United on Saturday.