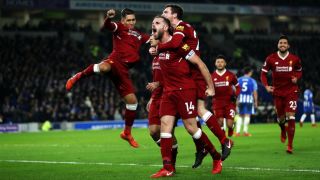 Liverpool captain Jordan Henderson has returned to full training after almost a month out with a hamstring injury.

Henderson last played on December 22, when he suffered the injury against Arsenal in the Premier League.

Manager Jurgen Klopp had been hopeful of a swift recovery, previously referring to Henderson as a "quick healer".

And there is a chance that the England international could return to action soon, as he took part in full training with the squad for the first time on Thursday.

Jordan Henderson is back in training ahead of Monday's clash with : January 18, 2018

Liverpool are next in action on Monday when they face Swansea City, giving him another few days to get himself in contention for a place in the squad.