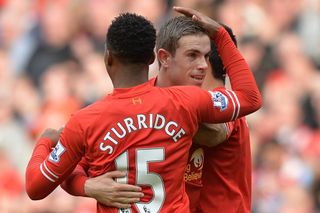 The England striker limped out of the 3-2 win over Manchester City with a hamstring problem, and missed the trip to Norwich City on Sunday, which Liverpool also won 3-2.

Henderson was also absent for the visit to Carrow Road, serving the first of a three-match ban after a straight red card received against title rivals City.

Sturridge revealed he could be fit for Sunday's crucial clash with Chelsea at Anfield earlier in the week, news that was welcomed by team-mate Henderson.

"He is a massive player for us," he told Sky Sports News.

"The last game against Norwich I thought we did brilliantly, but it's always a bonus to have a player like Daniel back, so hopefully he is fit and can do the business at the weekend.

"We're in a very good position but nothing's won yet. I think we've got to keep our feet firmly on the ground, starting with Chelsea.

"Our focus is on not getting too carried away and just keeping on what we've been doing all season."