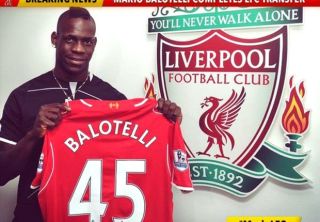 The Merseyside club sensationally brought controversial ex-Manchester City striker Balotelli back to the Premier League from Milan in a reported £16 million deal on Monday.

Balotelli was not registered in time to feature against his former club at the Etihad Stadium later in the day, but watched from the stands as his new side were beaten 3-1 by City.

The 24-year-old met his Liverpool team-mates prior to the game, and could be in line to make his debut at Tottenham on Sunday.

And Henderson feels the Italy international will inject some extra impetus into a Liverpool attack that has lost last season's star man Luis Suarez to Barcelona.

"Everyone is looking forward to working with Mario," Henderson told the Liverpool Echo.

"He's a very talented striker and a big player. Hopefully he's give us all a big lift and be able to play some part in the next game.

"He was in the dressing room before the game wishing everyone luck.

"Hopefully he can get a week's training under his belt and be involved against Tottenham."

Liverpool looked comfortable for much of the first half of Monday's match, before a defensive lapse from new signing Alberto Moreno allowed Stevan Jovetic to give City the lead shortly before the break.

Henderson went on to say there are plenty of positives for Liverpool to take from the game.

"I thought we dominated the first 40 minutes," he added.

"To be 1-0 down at half-time was tough to take ... I felt as though we were in control of the game but then they scored a second and it was difficult.

"We will watch it all again and work on the things that need to be worked on in training.

"We've got the players here so it's just a case of working on things to improve."