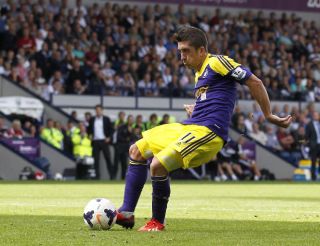 The Spanish winger came on a second-half substitute in Swansea City's goalless draw with Sam Allardyce's men after recovering from a two-month lay-off with a thigh injury.

And the 28-year-old former Valencia man is now hoping to show enough in training to put himself in contention for a place in the starting XI at Cardiff City on Sunday.

"I feel okay," he told the South Wales Evening Post. "I could have played for the last few weeks. This injury should have only lasted two or three weeks but when I started training I felt a problem in the same leg.

"I had to restart the treatment so it ended up being a long time.

"It's fortunate for me that on Sunday I could play 30 or 35 minutes.

"I felt good on the pitch and I will train hard this week ready for the next game. Now I need more minutes to rebuild the confidence.

"I think I should be able to train normally all week with the team and hopefully I'll be ready to start, but it's not my decision."

Hernandez, who has not started a Premier League match since a goalscoring performance in Swansea's 2-0 victory at West Bromwich Albion on September 1, is preparing to take part in his first South Wales derby, and is well aware of what the fixture means to fans of both clubs.

"The occasion should be unbelievable."