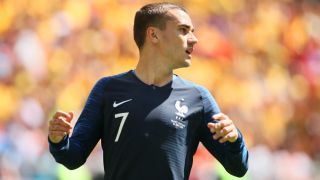 Atletico Madrid defender Lucas Hernandez said he was thrilled that compatriot Antoine Griezmann will be staying at the club next season.

Griezmann had been consistently linked with a move to LaLiga rivals Barcelona in one of the longest transfer sagas of 2018, but confirmed in a documentary last Thursday that he would be staying in Madrid.

It is now thought that the 27-year-old will sign a contract extension to remain at the Wanda Metropolitano and Hernandez said it was key for his club to secure that signature.

"Here, at Atletico, he can be the idol of everyone, of every fan," he said.

"If he would have gone to Barcelona, there are a lot of great players and the best player in the world too. He would have been in the shadow of some great players like [Lionel] Messi, [Andres] Iniesta or even Xavi before.

Hernandez was also excited by the prospect of playing alongside France team-mate Thomas Lemar after Atletico agreed a deal to sign the attacking midfielder from Monaco.

"Thomas Lemar is a great player. He will come with us and let's hope he will fit in the team as fast as possible," he said.

"It's true that Griezmann spoke a lot about the club with him, about what we were thinking about him. Now, he has to fit in as fast as possible when he will arrive there to become a really important player for us, because he is a great player."

France continue their World Cup campaign on Thursday against Peru after they narrowly defeated Australia 2-1 in their opening game.