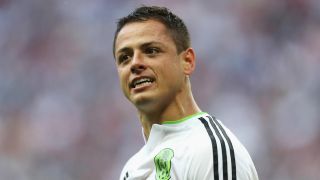 Bayer Leverkusen sporting director Rudi Voller has suggested that they would be open to selling striker Javier Hernandez.

The Mexico international has been linked with a return to the Premier League, with West Ham reportedly ready to spend £13million to bring him back to England.

Hernandez enjoyed an explosive first season in Germany, scoring 26 times in all competitions, but the 29-year-old managed only half of that tally in 2016-17.

Voller claims there has been persistent interest in the former Manchester United man, who has only a year left on his contract, and hinted that they could allow him to leave.

"He's interesting to many parties because of his quality," Voller told Frankfurter Allgemeinen Zeitung. "We often receive enquiries.

"We can wait a little. Something can happen later on."

Voller was quick to rule out the prospect of selling goalkeeper Bernd Leno, however, despite interest from Napoli.

"He is the clear number two in Germany," he said. "Napoli asked, we had contact, but we said very clearly: no chance."

Voller also backed midfielder Kevin Kampl to show commitment to the Leverkusen cause, despite seeing his move to Chinese Super League side Beijing Guoan collapse.

"It's not a problem," said the former Germany international. "Kevin is a totally respectable lad, he has great quality and he's always brought that to the club. He'll continue to do so."