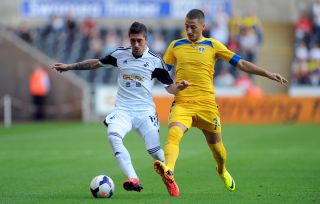 The Spaniard has missed the last six weeks for Swansea after suffering a hamstring injury in the 2-0 win at West Brom on September 1.

Hernandez's absence has been felt, with Swansea dropping to 15th in the table without the influential winger and club captain Ashley Williams, who has been sidelined with an ankle problem.

The former Valencia man says he is raring to go ahead of Saturday's home fixture though, as Swansea aim to end an eight-match winless streak in front of their fans in the Premier League.

"It was a shame for me because I felt I put in my best performance so far this season against West Brom, and then I pick up a hamstring problem," Hernandez told the club's official website.

"I've had to miss seven games so it has been a frustrating period. But now I feel stronger and more confident of being available for the Sunderland game.

"This week has been very important for me and hopefully, with a couple of more days training, the manager will see that I am ready for this game.

"It is an important fixture for us because we need to start picking up points at home.

"But we know Sunderland have a new manager in Gus Poyet, so the players will be looking to do everything to impress him and get a good result."