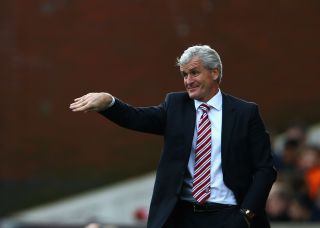 The reigning champions had to come from behind to earn just their second home Premier League victory of the season, as Peter Crouch's early opener and Marko Arnautovic's wonderful free-kick sandwiched Robin van Persie's equaliser.

Stoke were harshly denied at Old Trafford as late headers from Wayne Rooney and substitute Hernandez completed a trademark comeback for United.

However, Hughes feels Hernandez, who had come off the bench for United, should have been sent off for a late challenge on defender Robert Huth that preceded his goal.

"I didn't think they (United) were creating a great deal in the second half," said Hughes.

"Set-plays got them on level terms then they put up a stand-up cross at the back post and the lad (Hernandez) has won the game for them.

"In my view he shouldn't have been on the pitch anyway. It was a high challenge on Robert Huth, reckless in my opinion, and why the assistant didn't do something about it I don't know.

"I think the lad himself will agree. You can't raise your leg like that - it's dangerous. You've seen it before people have been sent off for lesser challenges than that.

"It's difficult to go against 70,000 people here. Sometimes you have to be strong as a referee as well, but there you go."

Hughes' men are on a six-match winless run in the Premier League, but the former QPR boss felt his side more than matched their opponents.

"I think in terms of what we produced, the effort we put in and the chances we created, certainly the first-half performance we could have been 3-1 or 4-1 to the good," Hughes continued.

"United didn't cause us many problems in open play apart from the moments where they took the game away from us.

"So we're really disappointed because I thought the performance level and the moments we produced, we deserved something.

"We had a game plan. We needed commitment and people to be brave to do the hard yards. That's what they did.

"They were excellent in that regard and took the fight to United. They (the hosts) were fortunate to get maximum points today."