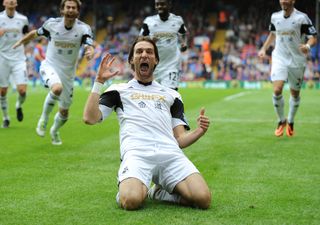 Michu, who scored 22 goals in his debut season for the Premier League side last term, has been selected for his country for the first time for their upcoming FIFA World Cup qualifiers against Georgia and Belarus.

Coach Vicente del Bosque turned to the 27-year-old as a replacement for the injured David Villa, and Hernandez is thrilled for his fellow countryman.

"I was very happy to hear Spain had called up Michu because he really deserves it," he told Swansea's official website.

"Of course, he scored 22 goals last season and he has started this season very well too, but he brings much more than goals to a team.

"He is someone who is very passionate for the team and he works very hard too - on and off the ball.

"In Spain there was talk of him getting a call-up not so long ago, but now everyone has seen his performances and I think after the Valencia game they knew it was time for him to be included.

"I hope he gets to play in the games. It would not only be good news for Michu but also the club too."

Reigning world champions Spain are currently top of Group I in the European qualification section, level on points with France but with a game in hand.