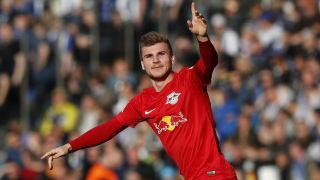 Timo Werner and Davie Selke each scored twice as RB Leipzig secured a Champions League group-stage berth for next season with a 4-1 success at Hertha Berlin.

Werner took his league tally this term to 19 as Leipzig ensured they will finish no lower than third in their debut Bundesliga campaign, with one more point required to seal a runners-up spot behind champions Bayern Munich.

Leipzig's place in European club football's premier competition is not yet guaranteed, however, with Red Bull Salzburg on course to win the Austrian top-flight title and qualify.

That would violate UEFA's rule that "no individual or legal entity may have control or influence over more than one club participating in a UEFA club competition", with the governing body set to make a decision at the end of the campaign.

For now, though, Leipzig can celebrate and it was their top-scorer Werner who proved the catalyst once again, heading home Marcel Sabitzer's excellent right-wing cross in the 11th minute.

That was an effort of high quality, but Werner's second in the 54th minute was bordering on comical as Hertha goalkeeper Rune Jarstein slipped in making a clearance, presenting the ball straight to Yussuf Poulsen, who selflessly squared for Werner to tap home.

With five minutes remaining, Leipzig substitute Rani Khedira was unfortunate to see the ball bounce off his head and loop in for an own goal, but any fears of a nervy finish were swiftly dismissed.

Selke, another replacement, slotted home on the break in the 89th minute and added a second for good measure in stoppage time as Leipzig celebrated in style.