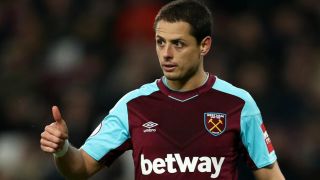 Javier Hernandez is not "on the market" and is unlikely to leave West Ham before the start of the season, according to club sporting director Mario Husillos.

The 30-year-old has recently returned to the club after World Cup duty with Mexico, where El Tri advanced from the group stage for a seventh consecutive tournament, only to be eliminated by Brazil in the last 16.

Despite a bright start with West Ham, Hernandez's future has been a subject of speculation after falling out of favour at London Stadium last season, when former manager David Moyes preferred Marko Arnautovic to lead the line.

The striker was a headline signing for the Hammers last year and Husillos, who worked with new manager Manuel Pellegrini at Malaga when they reached the Champions League quarter-finals in 2012-13, believes the former Manchester City tactician's arrival could provide Hernandez with a new lease of life.

Speaking to Marca Claro, Husillos said: "We have many expectations, but offers? There surely won't be any because people know we have him. For the moment he's not on the market at all.

"[Pellegrini's] style is one that favours all attacking players, because it is to maintain possession, attack, reach the area and create opportunities.

"The forwards in general are benefited by this type of play."

Pellegrini's first Premier League match as West Ham manager will be against Liverpool at Anfield on August 12.